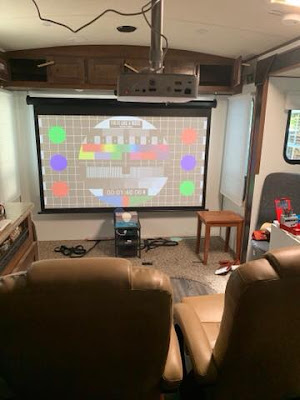 I know lots of recreational campers like to get away from it all for a few days or weeks at a time, leaving their internet connections and tv viewing for when they are not on the road.  I think that’s great. 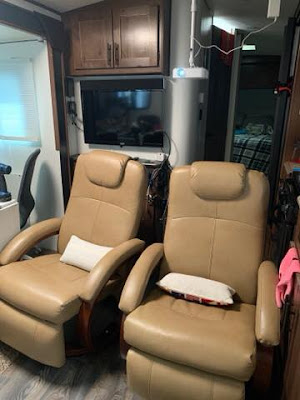 But I’m an addict. And when we are mobile, often for months at a time, it’s fun to have movie night on the road. 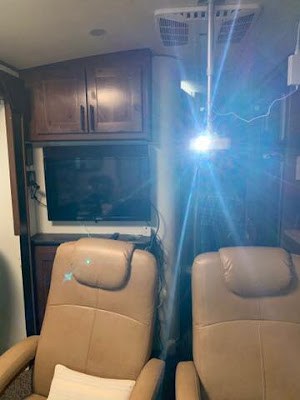 We can reverse our chairs from the rear section of our 24RLS, move them mid-ship, pull down an 80” screen, and fire up a small dc-powered LG video projector.  Audio is courtesy of a couple of Bluetooth speakers. 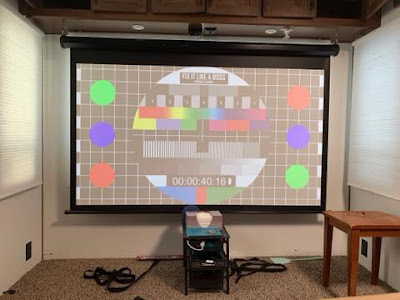 Call me crazy, and maybe it’s a “because one can,” kind of project, but it was cheaper than a flat panel tv, and much more small space friendly. Just cannot watch things during daytime.  (Too much light.)

Projector (though I would probably choose something brighter next time, and definitely something with some zoom range and lens shift, which this does not have so there is literally only one specific spot it can be placed)

Projector Mount (removable when not in use)

Speakers (though any bluetooth speakers would probably work since the projector uses bluetooth to send the audio out; I chose these because I found them for half off, refurb, and they have good bass response, are battery powered, and run for many hours after charging via USB) 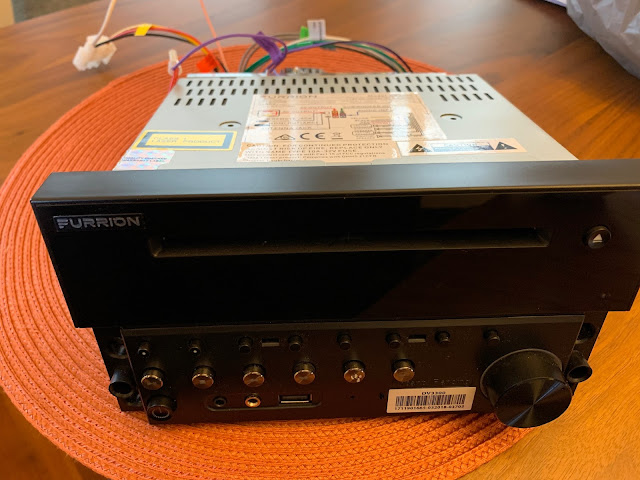 RV's are endlessly customizable.  We chose a brand with great bones (OutdoorsRV) and a unit with light usage (we are the second owners).  And when we have time and funds, we modify it to better serve our needs. Here is a quick update regarding one upgrade.  We hope to share more in the future.  Note that the product links to Amazon are affiliate links. We found that we didn't use the rig's DVD player/stereo combo.  It's a fine 12v Furrion system. But who watches DVD's these days?  Not us.  So we pulled it out. We stream from our iPhone using the excellent (thought expensive, at $50) Apple connector  after learning that many third party knockoffs don't work nearly as well. Besides, the rig's speakers are in the ceiling and are very low quality.  The sound when watching a video or listening to music should not come from the sky! But listening to TV shows via the TV speakers was painful and listening to music that way is just an insult.  So we a 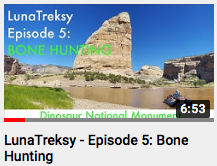 In the fall of 2019 we visited the areas around and in the Dinosaur National Monument.   Great trails, a good visitor center with a section of mountain cut away to reveal an endless number of dinosaur bones, and lovely dispersed camping along the Blue Mountain Road just outside the park made this one of the highlights of this trip. See the video here:   https://youtu.be/VY-ZmlcZpPI This episode features Dinosaur National Monument and surrounding areas in Utah and Colorado in 2019 including boondocking on BLM land just outside the park. We visit places in and around the dinosaur national monument like the town of Dinosaur, Colorado, the shipwreck on the Green River, via Harper's Corner Road and EchoPark (and the dugway to get there). Along the way, we see petroglyphs and the so called Whispering Cave, the Chew Ranch, and so on. We also go along the Ruple Point trail, view Whirlpool Canyon, and then head over to the Quarry Vistor Center, the Quarry Exhibit Hall, the Foss